The Joan Prince Memorial Swan River Swiss Pairs will be held on 6-7 November followed by the ANC Teams and Butler.

All entries in My ABF will be automatically transferred to the new dates. The ABF website has more details on how to withdraw and get refunds.

With the current lockdown in NSW, and the roadmap to lifting restrictions for F2F business not occurring until mid to late October, we will be moving the Sydney Spring Nationals online using the proven RealBridge platform. We are finalising the program that will be provided online and it will be published on Monday 6th September on both the NSWBA website and on My ABF. It will still be a gold point congress and PQPs will be available at half rate for certain events.

The NSW State Indiviual will be held online on the BBO platform on Saturday September 4 commencing at 10am. All players are welcome to enter but only those with a home club in NSW will be eligible to win the title.

The scoring is normal matchpoints, but your partner and opponents are different each round. Depending on the size of the field, you play with or against most of the other players. Everybody is playing the same system. It’s a fun competition without the hassle of arranging a partner and is also a great opportunity to meet people from around the state!

Entries are now open for the State Open Teams Qualifying which will be played online on the RealBridge platform, 4 Monday nights July 26, August 2, 9 & 16.

Congratulations to Jay Novak and Richard Carter the winners of the Online Restricted Pairs Championship and to Heath Henn and Mitch Dowling who will all receive the ABF grant to compete in the ABF Restricted Butler in Perth in July. Commiserations to Wei Zhang and Sherlock Shao who lost the tie-break for second place.

The VCC is rescheduled to the dates of Thursday 26 – Sunday 29 August.

That weekend is currently a bye in the AFL calendar but the Monday is otherwise a normal working day. Hence the event will end on Sunday night instead of the normal Monday lunchtime. We understand the new dates may not be suitable for some, while others who could not attend in June will now be able to join us. All withdrawals will be fully refunded.

All entries to the VCC need to be withdrawn or re-confirmed. Please consult the My ABF website ( www.myabf.com.au/events/congress/view/23 ) for details.

The inaugural NSW State Seniors Championships were held on 15-18 June 2021 at the Central Coast Leagues Club.

Congratulations to the ANC Seniors' Team for 2021.

The team to represent NSW in the ANC Seniors' Teams in Perth in July will be:

Congratulations to the ANC Women's Team for 2021. 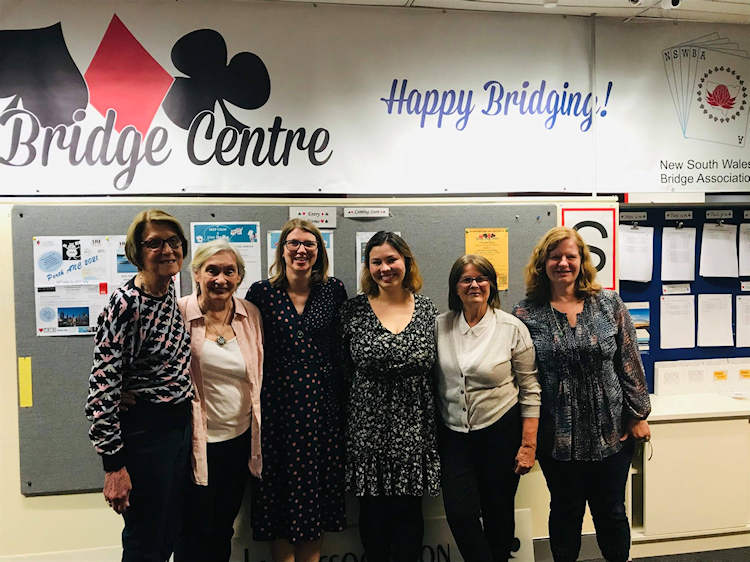 The team to represent NSW in the ANC Women's Teams in Perth in July will be:

Congratulations to the ANC Youth Team for 2021. 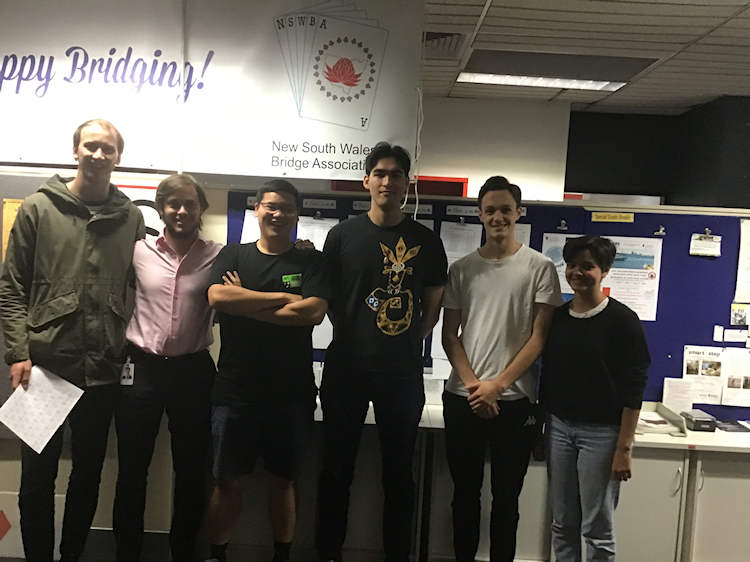 The team to represent NSW in the ANC Youth Teams in Perth in July will be:

Congratulations to the ANC Open Team for 2021. 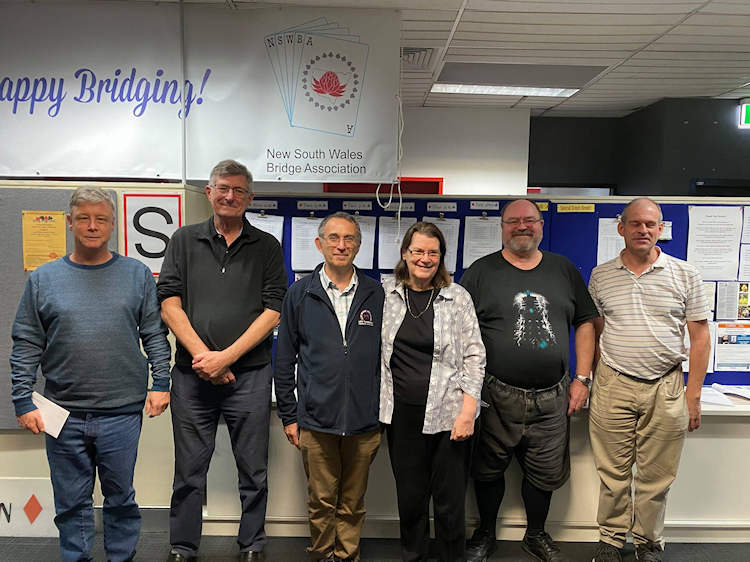 The team to represent NSW in the ANC Open Teams in Perth in July will be:

Entries are now open for the State Open Pairs Qualifying which will be played online on the RealBridge platform, 2 Monday nights July 12 & 19.

Following on from the decision of the Western Australian Government to introduce hard border controls with New South Wales, the Tournament Organiser has liaised with the ABF including the President, NEC and the Tournament Chair to announce

New South Wales will not be attending

The ANC Teams event shall be played with nonattending state(s) playing via Real Bridge with conditions of play to be detailed.

The ANC Butler will be played with reduced numbers. This event cannot be played online.

All other events including the Swan River will take place as scheduled.

Issues caused by the non attendance of staff have been discussed and planned for.

If conditions deteriorate further a decision will be made on the 30th June as to the possibility of postponing the event until later in the year as the calendar permits.

The TO is available to discuss any matter.

Entries are now open for the City of Sydney Teams which will be played online on the RealBridge platform, 3 Monday nights commencing June 21.

The NSWBA in conjunction with MasterBridge Online will be running an Online Restricted Pairs Championship on RealBridge on Saturday June 5, 2021.

There are two fabulous prizes on offer. Winning pairs will be offered grants to attend the ANC Restricted Butler Pairs in Perth on 17-18 July. These prizes, worth up to $2200 per pair, are generously donated by the Australian Bridge Federation.

For those unfamiliar with RealBridge three Taster sessions are available for practice at RealBridge Tasters.

The next Club Level Directors' course will be held at the NSWBA on Saturday June 5, 2021 commencing 10am.

The government has announced that

From 5pm on Thursday 6th May 2021, residents in the Greater Sydney region will have to wear masks in public indoor settings including on transport, at the supermarket and any event that is inside.
Hospitality workers will also need to wear them while serving diners.
These restrictions will be in place until 12.01am on Monday morning, 10th May.

As well as mandatory masks, residents will only be allowed to have 20 people in their homes for the next three days. There will also be no singing and dancing in indoor venues before midnight on Sunday, with the only exception being at weddings where a limit of 20 people is recommended for a dancefloor.

The restrictions apply to residents in Greater Sydney, the Central Coast and down to the Illawarra region.

This means that any clubs playing bridge in the designated regions will have to wear masks over the next three days. Club officials might consider purchasing a supply of masks for their players.

The Seniors' ITS will be played online using the RealBridge platform with entries limited to 16 pairs. The event will be played on Saturday 15th and Sunday 16th May, starting at 9.30am both days. The entry fee has been reduced to $60 per players and payments may now be made.

The SITS Swiss Pairs congress has been cancelled.

Due to the recent cases of community transmission and associated restrictions implemented by the NSW Government, the NSWBA is taking a cautious approach and moving the GNOT Direct Qualifier online.

It will now be played using the RealBridge platform rather than F2F. The entry fee will be reduced to $75 for members and $90 for non-members. Further information can be found on the GNOT entry page.

The next championship event at the NSWBA will be the State Mixed Pairs Qualifying, Mondays April 26 & May 3 at 7:15pm F2F.

This event qualifies pairs to the State Mixed Pairs Championships on the weekend of 29 & 30 May 2021.

After a great deal of consideration, it has been decided to postpone the ANC in Orange from 2021 until 2023. The Bridge Association of Western Australia have agreed to host the 2021 event commencing the same date, 10 July 2021. This transfer to Perth in 2021 also suits a need to utilise a prior commitment to the Perth Convention Centre after the Asia Pacific Congress in April was cancelled.

Many will be disappointed with this postponement (including the organising committee), but we believe it gives us the best chance for the Orange event to be a roaring success. Our key stakeholders understand the need for this postponement. Our travel consultant, Silver Compass Tours, believe that the rescheduling is exactly the right decision. They are in fact not scheduling any “longer term events“ until mid-2022.

The Organising Committee looks forward to bringing you a stellar ANC in Orange in 2023 and wishes BAWA good luck in organising an ANC at short notice. The NSWBA urges the bridge players of NSW to support the 2021 event.

Players who have qualified for the Open ITS Final, April 17-18 are asked to confirm their availabilty by entering and paying for their entry in advance before April 12, 12pm.

» Enter and pay for the Open ITS Final

The next championship event at the NSWBA will be the State Men's and Women's Pairs, Mondays April 12 & 19 at 7:15pm on the RealBridge platform.

Only active registered members of the ABF Masterpoint System who are members of a club affiliated with the NSWBA are eligible to enter.

In order to prepare players new to RealBridge for their upcoming congresses, MasterBridge Online is running a series of taster sessions over the next few weeks.

These taster sessions are just six boards and are intended for players to get a feel of the RealBridge software and a chance to press all the buttons to see how RealBridge works.

Please note the links will be active from half an hour before game time and there will be a partnership desk for anyone without a partner.

The next championship event at the NSWBA will be the ANC Butler Pairs, 4 Mondays commencing March 8 at 7:15pm on the RealBridge platform.

The top Open and Women's pairs will receive a refund of their entry fees to the corresponding 2021 Open or Women’s Australian Butler Pairs Championship in Perth.

Only active registered members of the ABF Masterpoint System who are members of a club affiliated with the NSWBA are eligible to enter.

The Interstate Teams Selection (ITS) selects pairs to represent NSW at the Australian National Championships which in 2021 will be held in Perth.

At the conclusion of Stage I on Monday Feb 8, qualified contending pairs will be invited to enter Stage II.

All other registered members of the ABF Masterpoint System are invited to enter the ITS Online Swiss Pairs which will run in parallel to Stage II.

Stage II and the ITS Online Swiss Pairs will both run on the RealBridge platform, 3 Mondays commencing Feb 15 at 7:15pm.